Miles below the ocean’s surface, living within perpetual, icy darkness, microscopic powerhouses are at work, thriving off of inorganic and organic matter. 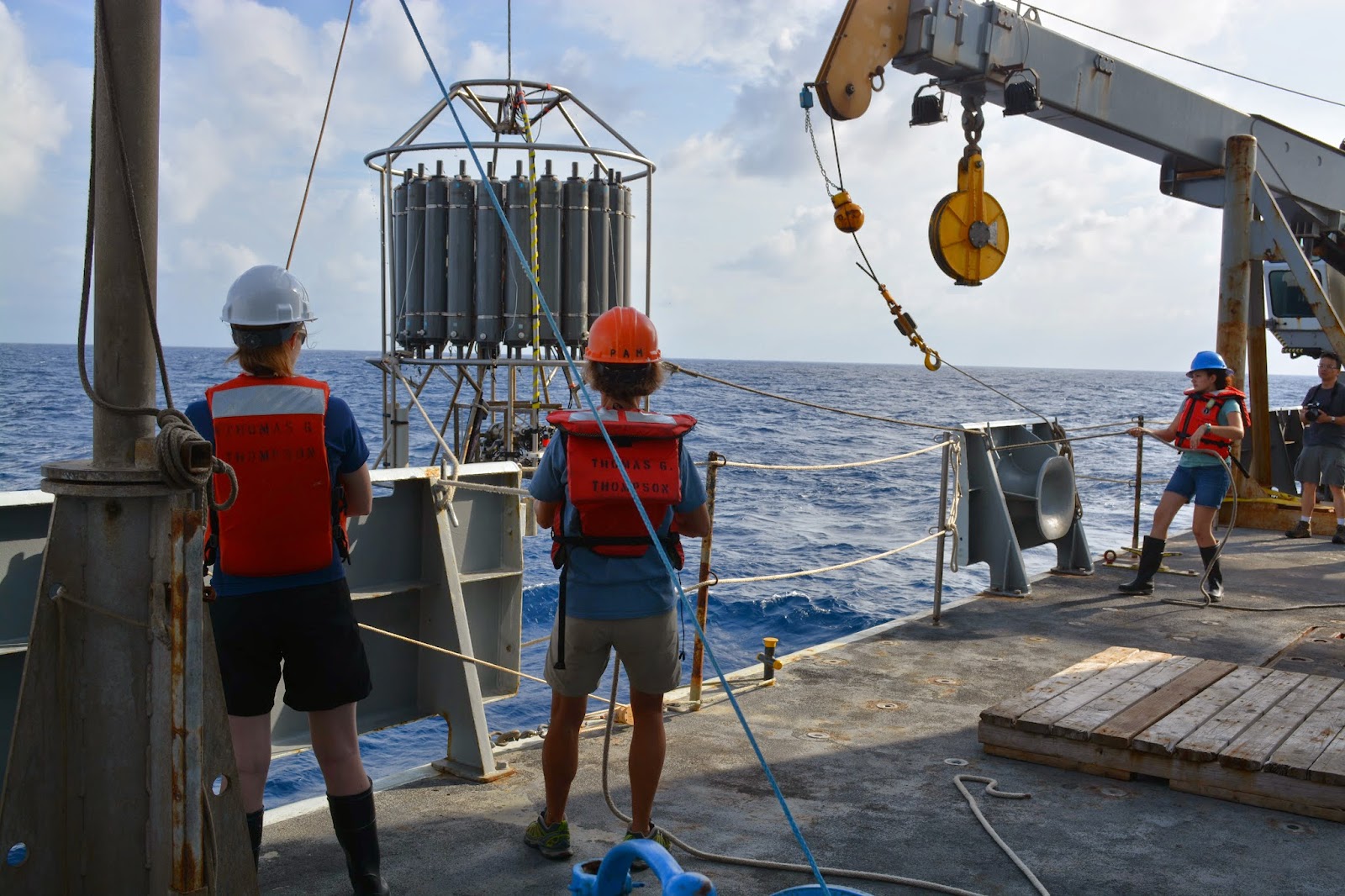 Brie Maillot, Hailey Farah (the Microbe team) bring in the CTD after its 4,000 m descent to the sea floor.

These are the prokaryotes of the deep sea and they can be found almost everywhere, whether it be miles below the seafloor, the water-sediment interface, or in the relatively ephemeral water column. The majority of these communities are composed of bacteria and their very distant cousins, Archaea. Unlike their relatives on land, which cause disease in a variety of organisms, these little guys are focused on using organic and inorganic matter to fuel their metabolisms and play key roles in biogeochemical cycles. Their distributions and roles in abyssal benthic communities are relatively unknown, even for deep sea standards, and the data set from this cruise (along with data from last cruise) will be one of the largest, if not the largest, data sets on these communities.

In order to analyze microbial communities, we are collecting from three main habitats: water column, sediments and nodules using a variety of tools (CTD, megacore, boxcore, respiration lander). People joke that we are the sample hogs of the cruise because we collect from almost every piece of equipment that is deployed. At this point, half-way through the cruise, we have over 500 samples to be analyzed in a shore-based lab (for nutrients, dissolved silica, DNA, RNA and flow cytometry/cell counting) and are quickly taking over the ship’s freezers. 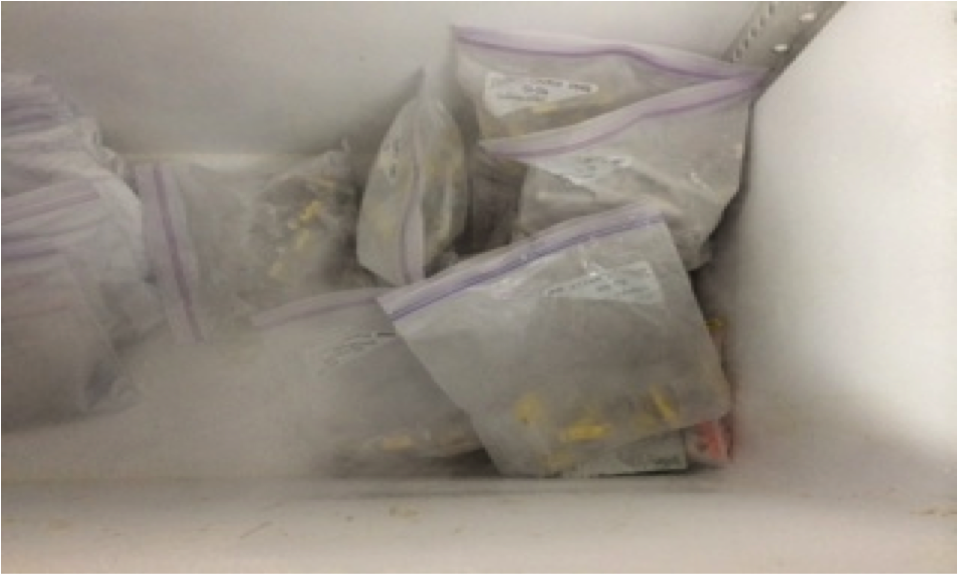 Most of the equipment that we collect from is shared with other groups, but the CTD is all ours. CTD stands for Conductivity Temperature Depth and, as explained by the name, it’s a device that measures water column characteristics (salinity, temperature, oxygen concentration, fluorescence, pressure). The CTD itself is attached to a rosette of Niskin bottles which fire at certain depths to collect water. We collect water from these bottles, which is used to fill lots of little and big carboys. It can be wet work but when you’re in the tropics during the day, the 1.5°C bottom water is incredibly refreshing and does a terrific job of washing all the mud off your boots. Once we’ve collected all of our water, it takes a few hours of filtering the water to isolate the microorganisms for future DNA/RNA extraction and sequencing. 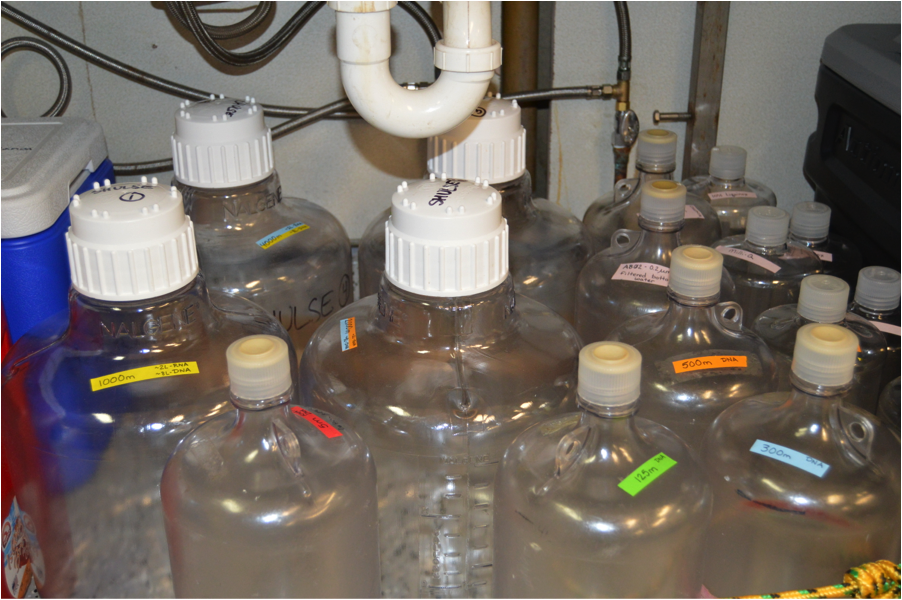 Our carboy stockpile (the larger ones) 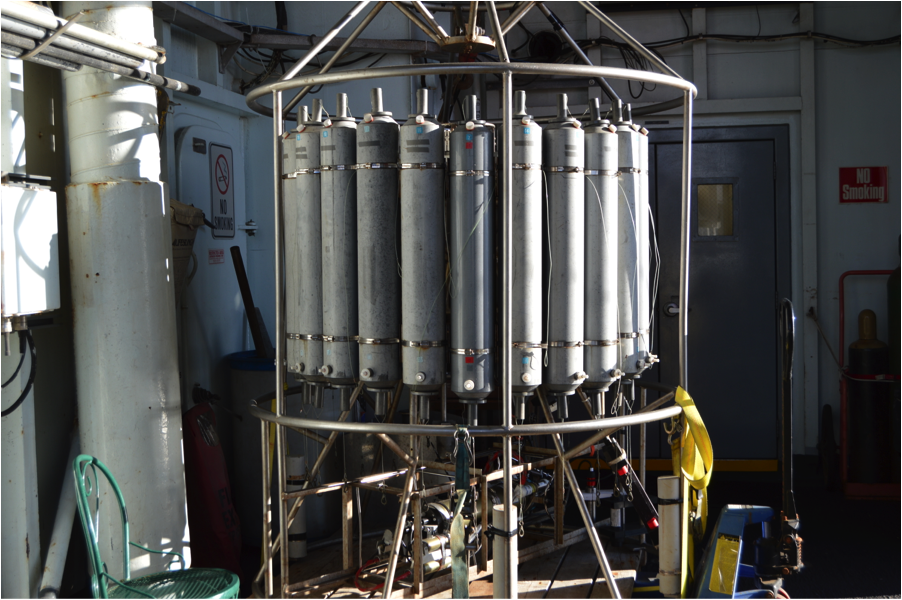 The ship’s CTD and rosette. It looks pretty rough but has worked wonderfully thus far. The actual CTD in the middle below the bottles.

Our second sampling staple is the megacore, which we use to collect the microorganisms from the different sedimentary layers. Once collected, everything gets frozen using liquid nitrogen and placed in the nice, frosty -80°C freezer. 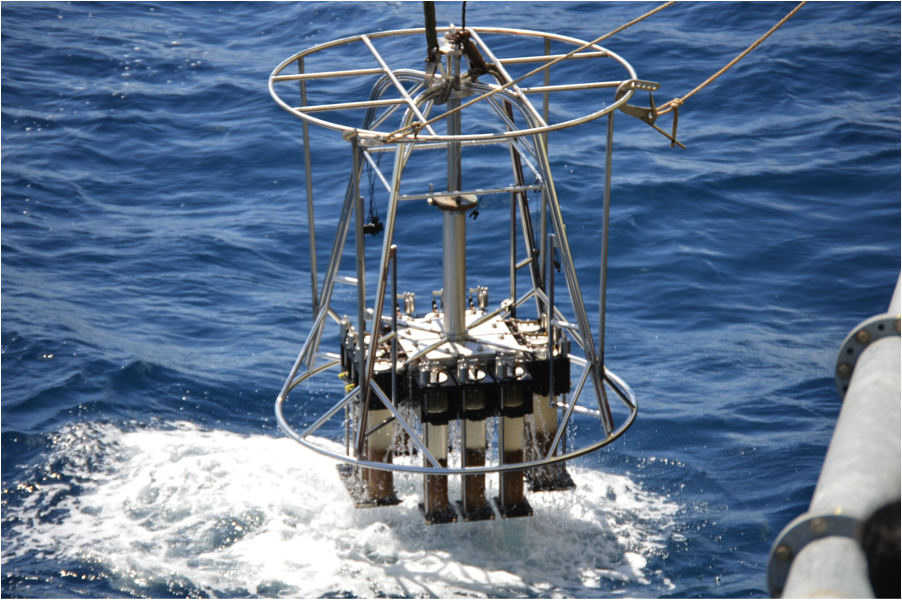 The megacore rising from the water with 12 full cores

Upon return to a shore-based laboratory, the DNA will be extracted from our samples and sequenced for prokaryotic and eukaryotic microorganisms. This data can then be compared to previous cruises and tell us more about the microbial assemblages in these habitats and surrounding polymetallic/manganese nodules.

Written by: Brie Maillot, University of Hawaii at Manoa