Hello, we are the EBS (epibenthic sledge) team, also known as the “sledge dancers” onboard of the R/V Thomas G. Thompson. 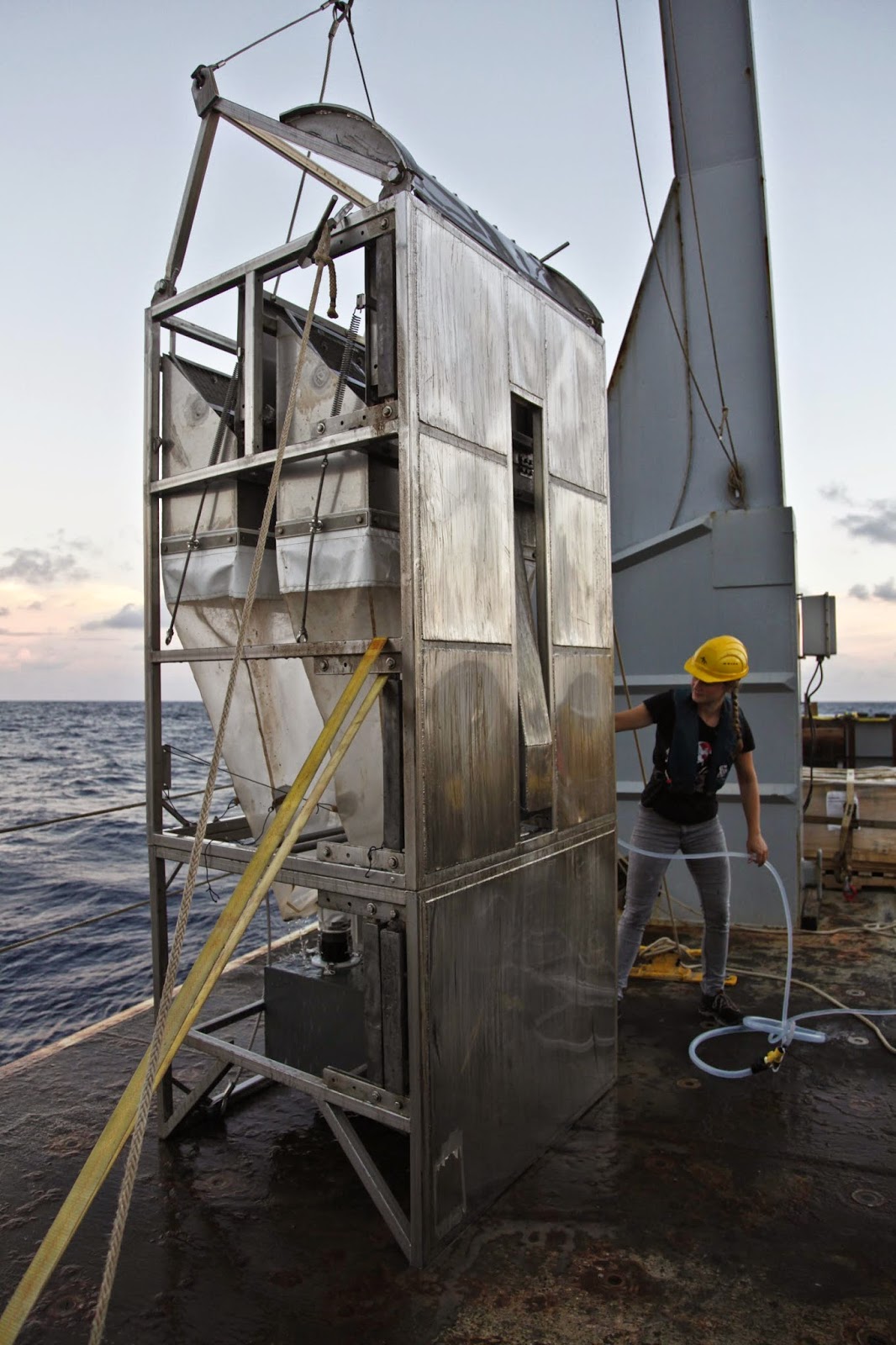 The EBS is a sampling device with two cone nets (an epi- and a supranet) designed to collect small animals in the upper centimeters of soft bottom sediments and of the sediment surface itself.

Valeska Borges is rinsing the nets of
our epibenthic sledge, named “ANNA”.

During the last six EBS deployments a large amount of animals, such as crustaceans and bristle worms, and plenty of manganese nodules have been collected. That’s why some scientists here believe that we perform a dance ritual before every deployment to communicate with Neptune to grant us good biological samples. 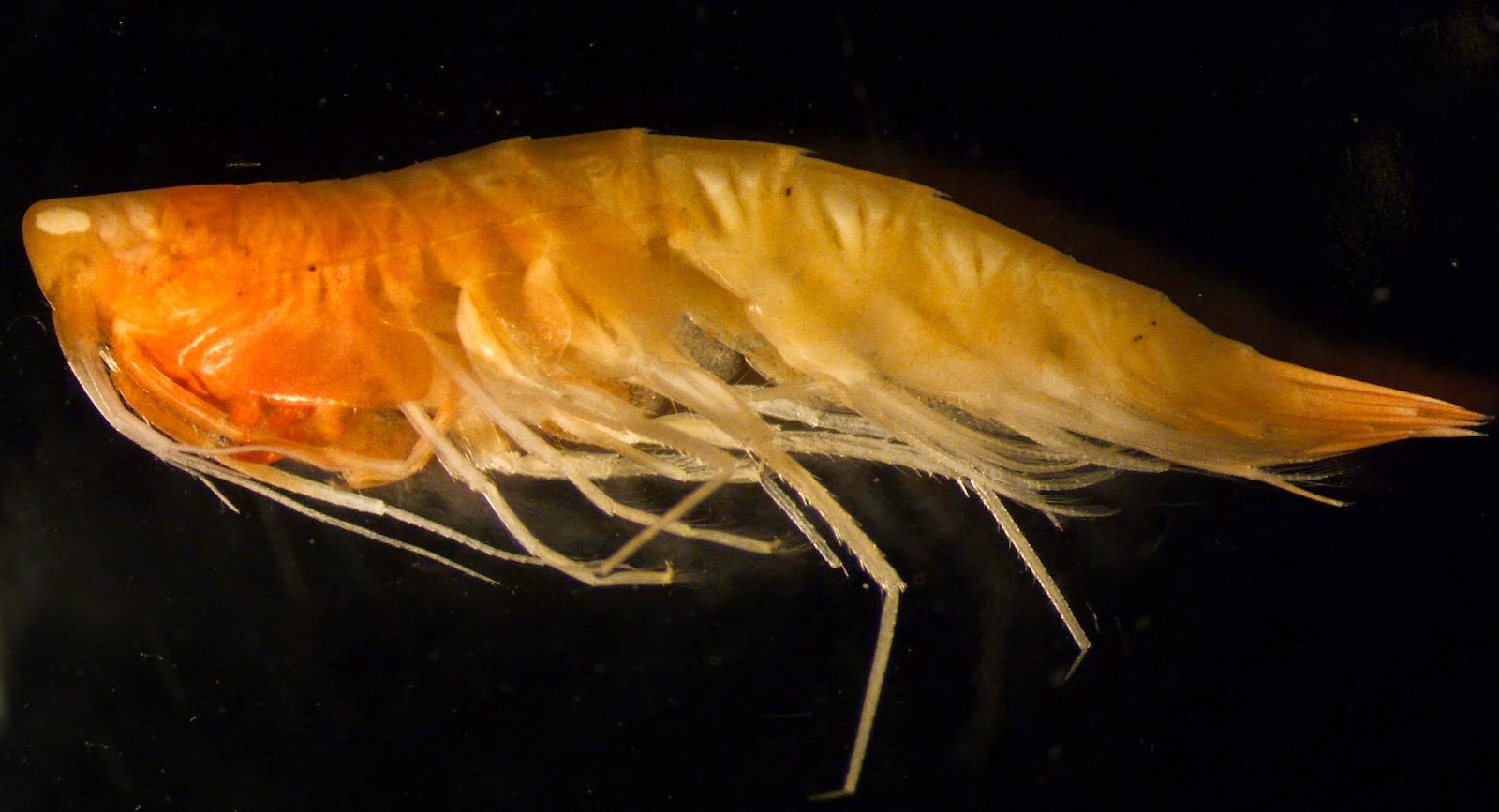 This is an amphipod crustacean caught with the EBS last night.

Aside from ritual dances, a well-conceived station planning, maintenance of the sledge, and controlling each stage of its deployment from going down, landing, and “maneuvering” it over the sea floor are crucial for successful sampling. Since the EBS is trawled like a sledge, the seafloor should be a plain without topographic highs. According to the seafloor topography obtained with multibeam sonar, we decide where to trawl the EBS. 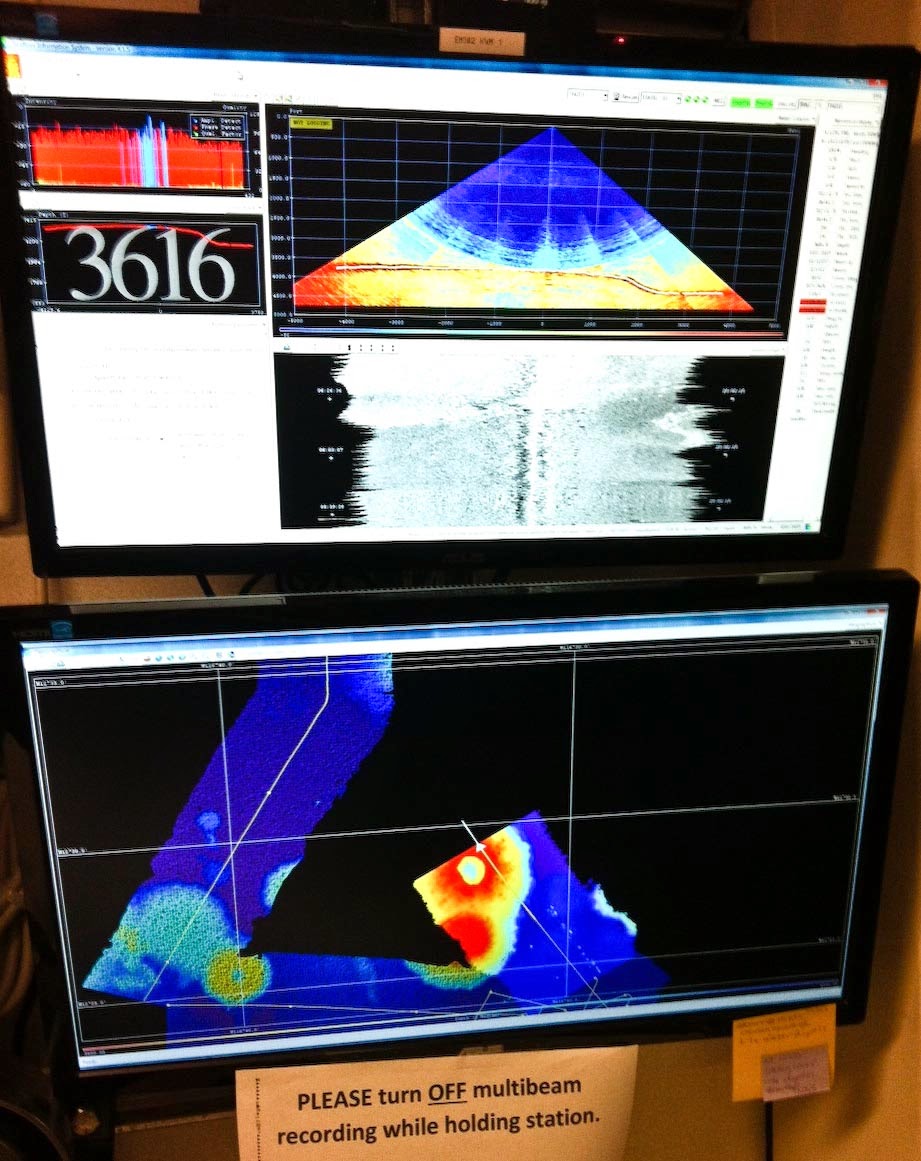 A multibeam system, pictured above, is used to roughly map the seafloor. Station planning can be quite exciting when there suddenly appears a seamount on the map as we experienced before our second EBS deployment. 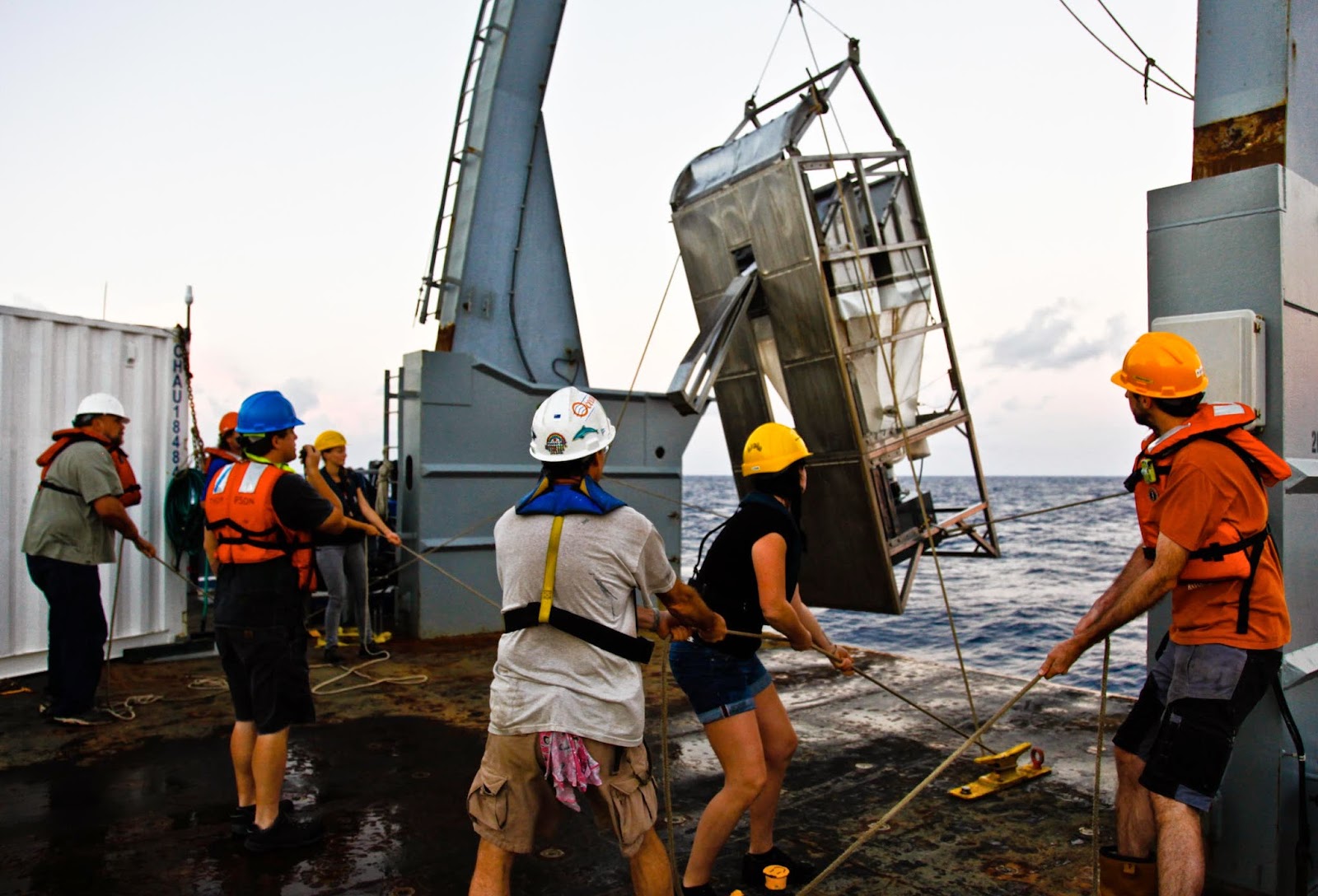 Valeska Borges, Inga Mohrbeck and Adrian Glover recovering the sledge. As shown here, behind every team is a great ship’s crew supporting the scientists.

At a water depth of 4100 m, it takes our sledge about 7 hours to return on board. Once the sledge is on board the content of the cod end samplers has to be fixed quickly. 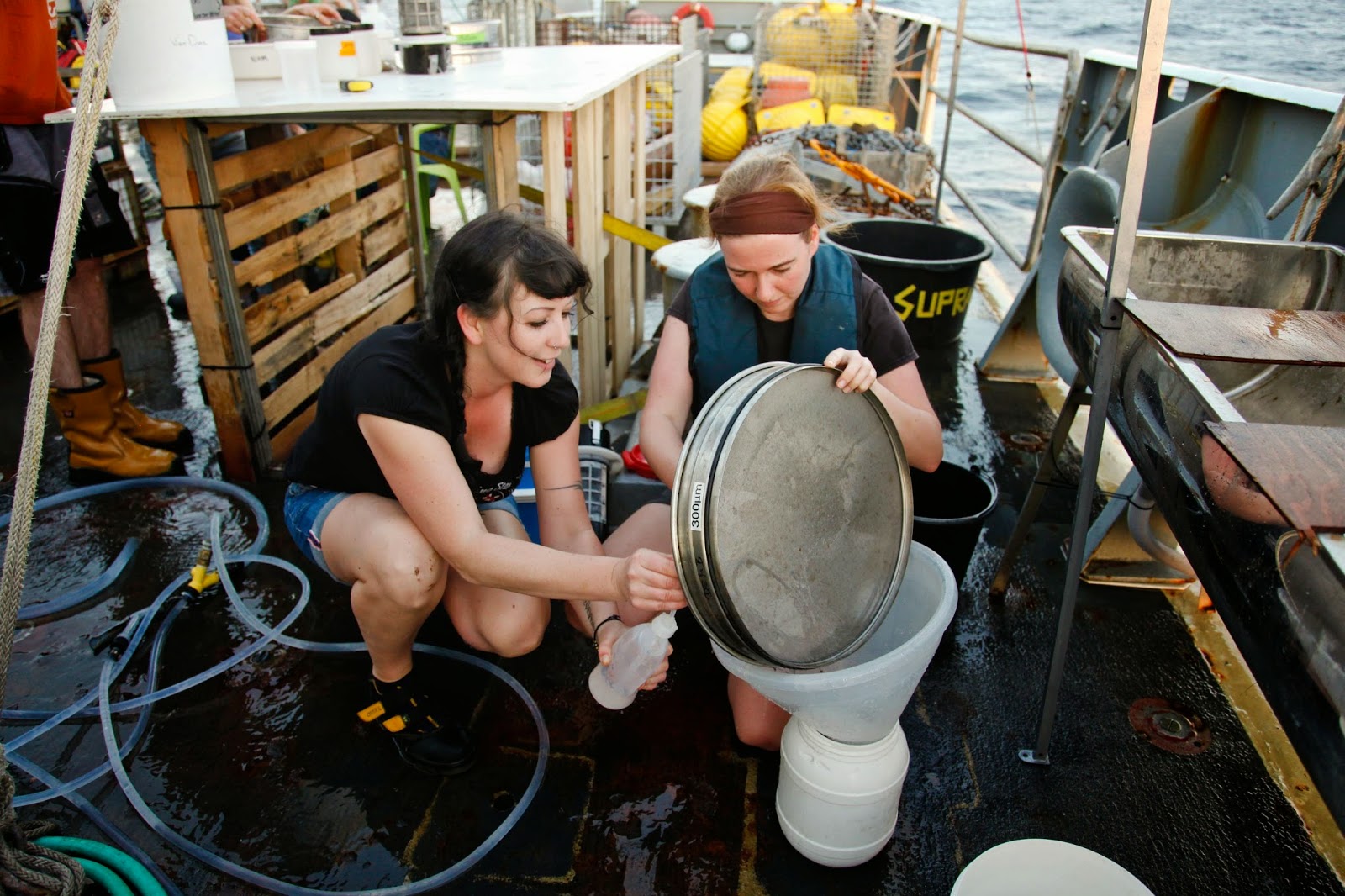 Here Inga Mohrbeck and Lena Albers are sieving and fixing the main samples in the cod ends with chilled ethanol for molecular analysis of small crustaceans. We are looking forward to finding interesting and new deep sea species from the Clarion Clipperton Zone.